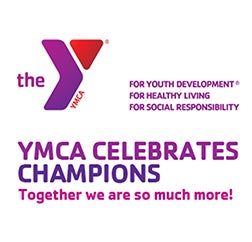 YMCA Celebrates Champions is the signature fundraising event for the YMCA of Greater Hartford. Proceeds support Y programs that focus on Youth Development, Healthy Living and Social Responsibility. The evening will be filled with fun and excitement as the YMCA pays tribute to the Champions in our lives. Enjoy a unique speaker, great company, live and silent auctions, and other special opportunities.

Andre Tippett was drafted by the New England Patriots in the second round of the 1982 NFL draft (41st overall) out of University of Iowa and played 12 seasons for the Patriots. He was a member of NFL 1980s All-Decade Team and earned five consecutive trips to the Pro Bowl. Andre was named to the Patriots Hall of Fame in 1999; inducted into the University of Iowa’s Hall of Fame in 2007; and inducted for Enshrinement for Pro-Football Hall of Fame on August 2, 2008.

Not only is Andre Tippett one of the most respected professional athletes in the NFL–a linebacker who played 12 seasons with the New England Patriots – but he is also a man who continues to awe people with his kindness, sincerity and  enormous devotion to family and faith.